Shah Rukh Khan shared his co-star Katrina Kaif’s look from their upcoming flick Zero. King Khan shared this image on the occasion of Katrina Kaif’s birthday. While, in this upcoming film Shah Rukh plays as a vertically challenged man. However, there has been nothing much revealed about either leading actors Anushka or Katrina’s role in the film yet. 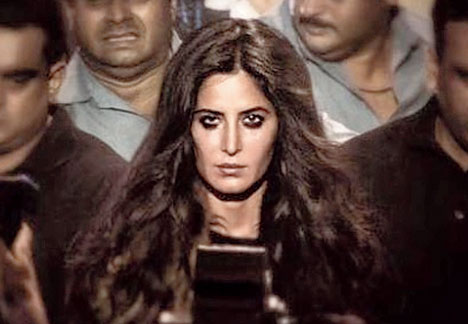 SRK took to his twitter handle to share the image of Katrina from the film and captioned it as, “There are so many lovely pictures of her, but this one speaks to me beyond my friends beauty….hope u all also give it love.”

He also wrote a sweet post with the image, that read: “We know she is beautiful. We know she has set our hearts fluttering. She has loved like she has never been hurt. She dances like nobody’s watching her. She has lived like it’s heaven on earth. But all us actors wait for the moment when we can sink our teeth into a character deeper than beauty and its trappings. Here’s my friend on her birthday braving to enthrall us in a new avatar. You may ask ‘why so serious..?’ Hmmm… Aapka pata nahi, mujhe toh gusse mein yeh aur bhi haseen lagti hai. Happy birthday my brave and beautiful Katrina…Love, Shah Rukh.”

Speaking about the latest look of Katrina from Zero, the actress is seen surrounded by a group of bodyguards as she is being clicked by the paparazzi. Katrina looks, depressed or upset about something.

Zero is directed by Aanand L Rai and jointly produced by Rai and Red Chillies Entertainment’s Gauri Khan. This flick features Shah Rukh Khan, Anushka Sharma and Katrina Kaif in the lead roles. This film is scheduled to release on Dec 21, 2018.