If you see the graph of a phones evolution, smartphones have only gotten bigger. But there were phones with 3-inch or even 4-inch display. Zanco’s Tiny t1 claims to be the world’s smallest phone. The phone measures just 46.7mm x 21mm x 12mm while weighing just 13 grams.

The tiny t1 is smaller than a thumb and lighter than a coin. Zanco brands the tiny t1 as a ‘talk and text mobile phone’ with an alphanumeric keyboard. It’s a fully functional phone with support for calls and text. The makers of Tiny t1 find this phone to be perfect for joggers, runners, walkers, cyclists and those who take part in extreme sports because it can go in any-size pocket due to its compact size. 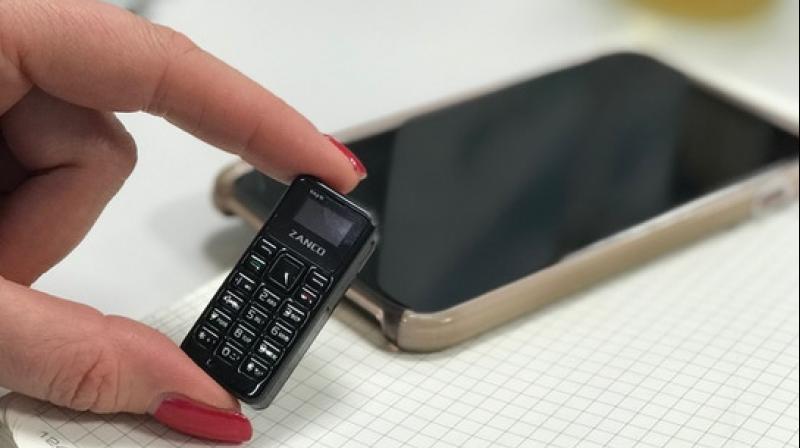 Coming to the specifications, Tiny t1 has a tiny 0.49-inch OLED screen with 64 x 32 pixels resolution. It is powered by a MediaTek MTK6261D motherboard and 32MB of RAM. This phone supports a single Nano SIM and can store up to 300 contacts in the phonebook. This tiny t1 can store up to 50 SMS messages and also the last 50 incoming/ outgoing numbers in the call log, using its 32MB of storage. This device has connectivity options such as 2G, Bluetooth, and Micro-USB. The tiny t1 is a quad-band phone and will be available in two 2G band frequencies, such as 850/1900 and 900/1800. There is no support for 3G or 4G frequencies. There is no Internet access on this phone. This Tiny t1 is fuelled by a 200mAh battery that claims to provide 3 days standby and 180 minutes talk time. The bottom of the tiny t1 features a mic and a loudspeaker

If you have any doubts about its functionality, the prototype of this Tiny t1 is listed on the Kickstarter page, which is fully functional and ready to go into mass production. If you’re interested in this tiny piece of hardware, you’ll need to fund the Kickstarter campaign. Zanco currently priced the tiny t1 mobile phone at roughly around Rs. 2,280, which u need to fund on the phone’s Kickstarter page. If the reports are to be believed, the company will start shipping the phone anywhere in the world by May 2018, provided the campaign reaches its goal of $33,480 by January 19, 2018. This shouldn’t be hard considering the company has already reached almost $29,096.