The smartphone company, Vivo launched V7 phone in India. The Vivo V7, which looks like a toned-down version of the V7+ which was launched in September. The concept of a bezel-less screen is fast becoming a most wanted feature in smartphone market. This concept isn’t restricted to the top flagship segment any more, even as companies like Micromax and LG have recently made it more mainstream, like the Micromax Canvas Infinity and the LG Q6/Q6+. The Vivo V7 also belongs to the mid-level price segment and ship with a near bezel-less screen, meaning the phone is designed from grounds-up for multimedia consumption.At the same time, the V7 continues Vivo sits ridiculously high megapixel counts in their cameras. 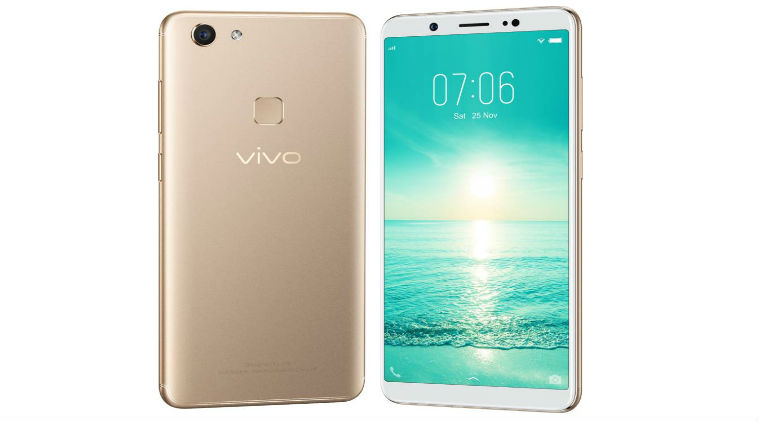 Image; Indianexpress.com
Now, let’s take a look at its specifications, The Vivo V7 is powered by a 1.8GHz octa-core Qualcomm Snapdragon 450 processor clubbed with Adreno 506GPU, paired with 4GB RAM and 32GB internal memory, which is further expandable up to 256GB via a microSD card.The phone runs on the company’s preparatory Funtouch 3.2 OS, which is based on Android 7.1 Nougat. There’s a 5.7-inch Full View 18:9 display takes up 83 per cent of the front panel, with two slim bezels on the top and bottom of the device. The resolution is a disappointing, 1440 x 720, though, for a phone that’s costs Rs 18,990.

But coming to the camera, it looks like the highlight of this phone as it has a 24MP front-facing selfie camera with a portrait mode, an advanced beauty mode, HDR, and a soft LED flash. The rear camera is a 16MP one with a flash.Vivo V7 is fuelled by a 3000mAh battery, which is claimed to last a day on a single charge.In terms of all-round design, the Vivo V7 comes with a full-metal body with discreet antenna lines and a rear-mounted fingerprint scanner. The phone comes with curved 2.5D Corning Gorilla Glass 3 on the front. Vivo’s new phone can also be unlocked via a user’s face. Noe, about the connectivity, this smartphone gets a dual-SIM slot which will be capable of operating 4G VoLTE networks. The device comes with Bluetooth v4.2, GPS/ A-GPS, Micro-USB, and FM.

The Vivo V7 is priced at Rs 18,990 offline and online exclusively from Flipkart from November 24. Potential buyers can now pre-order the phone from the platform. This smartphone will be available in Matte Black and Champagne Gold colour options.