The Vivo V7+ smartphone launched in India. the V7+ has come with a revamped design, updated hardware, and enhanced front and rear cameras. The device has a near bezel-less screen and lots of megapixels in the selfie camera department. The phone comes with a 6-inch screen but because Vivo has shaved off its bezels, the V7+ feels much smaller in the hands. Vivo phones are known for their high megapixel cameras so it comes as no surprise that the V7+ sports a whopping 24-megapixel camera on the front. 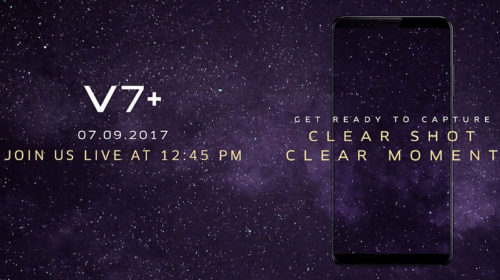 Image: techworldsid.com
The Vivo V7+ comes with a 6-inch 720p IPS LCD display with a 1440×720 pixel resolution.It has an 18:9 aspect ratio screen which Vivo calls as a Full View display. But actually, the overall device is equal in size to a phone with 5.5-inch display. The smartphone has a premium unibody design and weighs just 160 grams. It is the first device in India to be powered by the latest 1.8Ghz octa core Qualcomm Snapdragon 450 processor along with 4GB RAM and 64GB internal storagewhich is further expandable by up to 256GB via a micro-SD card slot. The phone is a dual SIM device.Speaking about the connectivity features, it has 4G with VoLTE, WiFi and Bluetooth. Other features include a 3,225mAh battery, fingerprint scanner, USB OTG support, AK4376A Hifi audio chip and Android 7.1 with FunTouch UI.

Now coming to the camera department of this device, Vivo has always had a special interest on camera and the V7+ is has some in its bag. The V7+ comes with a 16MP rear facing camera with phase detection autofocus, a new Live photo feature along with face beauty, watermark, touch capture, voice capture and palm capture. Now Selfie freaks would love this, V7+ is the first smartphone in India to offer a 24MP Moonlight front camera with wide angle lens, a soft LED flash and comes with mirror selfie and group selfie feature.

If the reports are to be believed, The Vivo V7+ will be available in Matte Black and Crown Gold colour options at a price of Rs 21,990 from September 15 across online as well as offline channels. Pre-booking for the Vivo V7+ is said to start from September 7.