Finally, here is the good news for fans of Virat Kohli and Anushka Sharma. Yes, they tied the knot, after days of questions about will they or won’t they. Actress Anushka Sharma and cricketer Virat Kohli married in Italy. In a private ceremony in the presence of family members and close friends, the most talked celebrity couple said their ‘I do’s’ in Italy. Both the actor and the cricketer confirmed this news about their marriage on their Twitter accounts with few adorable, candid photos. 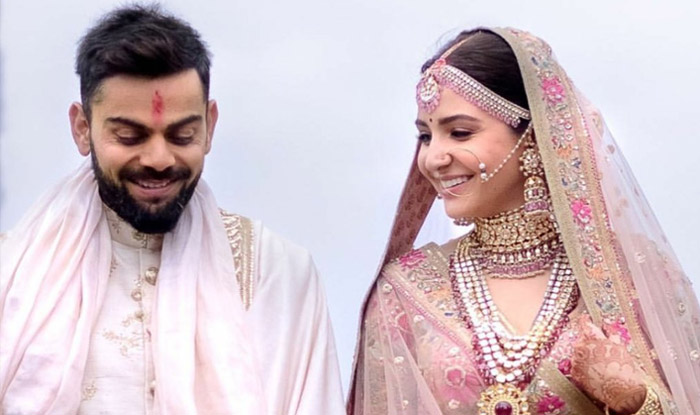 Image:india.com
A post on Anushka’s official account read, “Today we have promised each other to be bound in love forever. We are truly blessed to share the news with you. This beautiful day will be made more special with the love and support of our family of fans & well wishers. Thank you for being such an important part of our journey.” Kohli too posted the same announcement on his official twitter account.

Anushka Sharma and Virat Kohli have been dating for several years after meeting on the sets of a commercial. They often post messages to each other on social media and are pictured attending social events together. Last week, the Internet exploded with rumours that Anushka Sharma and Virat Kohli had a hush-hush wedding planned in Italy. But both the couple denied it.

As per reports, the Virushka couple will be hosting a reception in New Delhi for their relatives on December 21, followed by a reception for industry friends and cricketers in Mumbai on December 26.

Meanwhile on the work front according to a statement from the couple, Anushka is getting ready to begin the next schedule of Anand L Rai’s film with Shah Rukh Khan in Mumbai. She will also start preparing for Sui Dhaaga, shooting for which starts in February 2018 with Varun Dhawan. Anushka will also be busy with the marketing and promotions of Pari, which is releasing on February 9. Virat, on the other hand, will be playing the series in South Africa for 2 months which includes three Tests, six One Day Internationals (ODIs) and three Twenty20 International (T20I) matches.