Finally, the teaser of actor Ram Charan’s upcoming film Vinaya Vedhiya Rama is out and looks like it’s going to make fans really happy. After watching the teaser videos, the film seems to be a complete action drama and a thunderous one. Ram Charan plays the main lead in the film and has a fierce presence on screen. It has some strong dialogues; Ram’s angry young man avatar and Vivek Oberoi’s blink ‘n’ miss performance makes this teaser more exciting.

Coming to the teaser, the 48 sec video opens with Ram walking in as an angry young man with swag. Meanwhile, a powerful dialogue sounds in the background which sets the mood of the teaser. In this dialogue Ram Charan is heard asking the antagonist to choose between being threatened and getting killed. “To threaten somebody, it takes 10 minutes. To kill someone, it takes 15 minutes. Whatever it is, you can choose,” Ram Charan roars on screen. Then comes the Vivek Oberoi who plays as the antagonist in the movie. After watching this teaser video fans have pretty high hopes from Ram and Vivek from this movie. 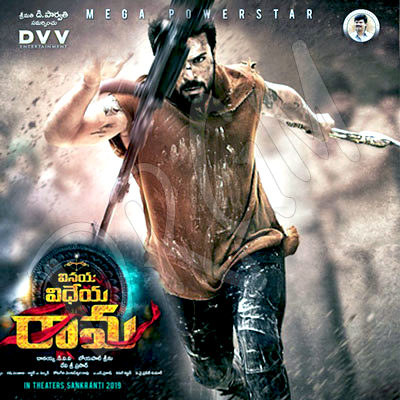 Vinaya Vedhiya Rama, is directed by Boyapati Sreenu and bankrolled by DVV Danayya under his banner DVV Entertainment. The music of the film is helmed by Devi Sri Prasad. Starring Ram Charan, Kiara Advani, Vivek Oberoi, Ramya Krishnan, Prashanth, Sneha and others. This action thriller will be hitting the screens on Sankranthi 2019.