Currently, it is the time of historical’s and biopics in Bollywood. The new year 2019 will see the release of two major big budget films based on the life of two figures from history, incidentally both having links with the mighty Maratha empire. While, one is Kangana Ranaut starrer ambitious project Manikarnika: The Queen of Jhansi which is based on the life of Rani Laxmibai, on the other hand Maratha commander Tanaji Malusare, who is celebrated for his role in the Battle of Sinhagad in 1670 AD, will be played by Ajay Devgn in upcoming film Taanaji: The Unsung Warrior. 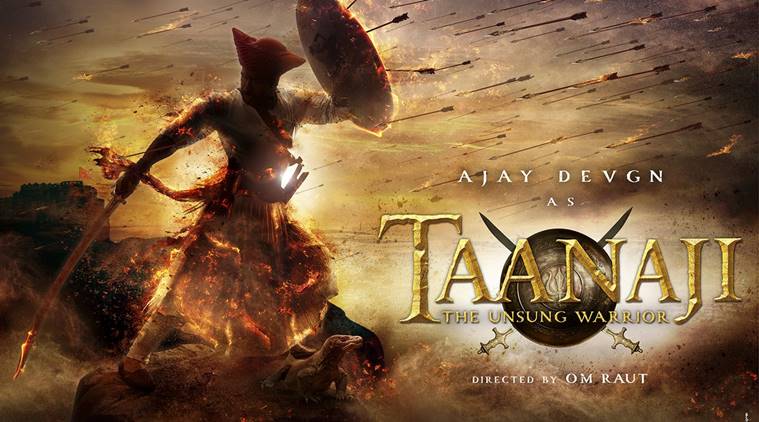 The director of the film has previously shared the first look of the film Taanaji in July 2018. Now, as are entering 2019, Raut welcomed the new year with a new picture from his film that showcases Ajay as the warrior. Sharing a picture of Ajay from his upcoming film, Raut wrote, “Happy New Year!!! Har Har Mahadev!!! @ajaydevgn @TanhajiFilm.”

Coming to the latest picture released, it shows us Ajay as Taanaji and his men jumping and descending through the mountains with the help of thick ropes. Dressed in white dhoti, kammarbandh (waist band), armour, pagdi (head gear) and with his face half covered, Taanaji looks set for a clash. The intense look in Ajay’s eyes is impressive. For quite some time we find the director of the film has been sharing pictures from the sets of the film and from them we know that celebrated art director, who had most recently known for creating the elaborate sets for Baahubali series, Sabu Cyril is creating the look of Taanaji as well.

Taanaji: The Unsung Warrior is directed by Om Raut. This big budget film is bankrolled by Ajay Devgn, Bhushan Kumar and Krishan Kumar. This film has a great assembled cast that includes Ajay Devgn, Saif Ali Khan, Jagapati Babu, Ajinkya Deo, Pankaj Tripathi and more. This film is expected to realese on 22 November 2019.

Hoowever, on the work front, Ajay Devgn has some interesting projects lined up for this new year including the Dhamaal franchise called Total Dhamaal, De De Pyaar De and Turram Khan.