Ever since the first look of Hrithik Roshan from his upcoming film ‘Super 30’ revealed, were Hrithik was seen with a beard and a rugged look, fans are going crazy over his de-glam avatar. And now, a new picture of the actor, from the sets of Super 30, has surfaced on the Internet. In this new picture, the actor is seen selling papad wearing a light blue shirt and pastel pants on a bicycle, sweating in the scorching heat on the streets of Jaipur.

Image: indianexpress.com
The film titled Super 30, is based on the life story of Bihar-based mathematician Anand Kumar, founder of Super 30 programme. Where he gives coaching to a batch of about 30 students from poor families for IIT-JEE entrance exams free of cost every year. As per reports, during the past 15 years, he has sent 450 candidates to prestigious technical institutes in the country, 396 of them to the coveted IITs. 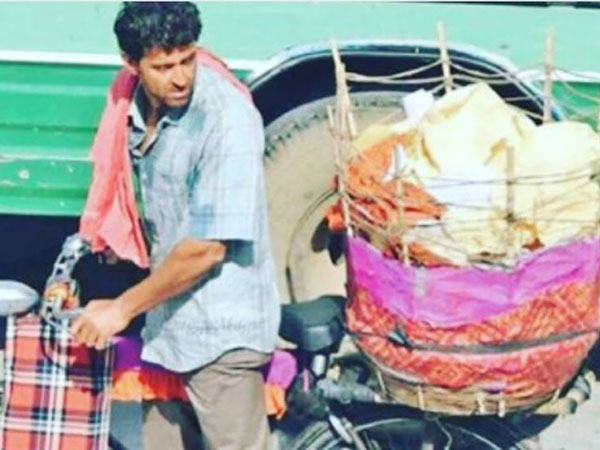 Image: bollywoodtabloid.live
There were few other pictures of Hrithik Roshan, from the sets of Super 30, which surfaced online. In one of the photo, the actor was seen sharing screen with TV actress Mrunal Thakur, on the ghats of Varanasi. Mrunal is known for the character Bulbul in TV show Kumkum Bhagya.

Super 30, directed by Vikas Bahl, were Hrithik Roshan plays the lead role as mathematician Anand Kumar is expected to hit theatres next year in January.