Smartron a domestic original equipment manufacturer (OEM) launched the t.phone P Smartphone in India as its newest model under the t.phone range. The Hyderabad-based company recently expanded its brand and entered the Middle-East market. It had received an undisclosed sum of funding from cricketer Sachin Tendulkar. This budget smartphone has a massive 5,000mAh battery, which the company claims that a fully charged device lasts for more than two days on a single charge and also gives the option to charge other devices such as smartphones, smart bands and speakers via OTG support. 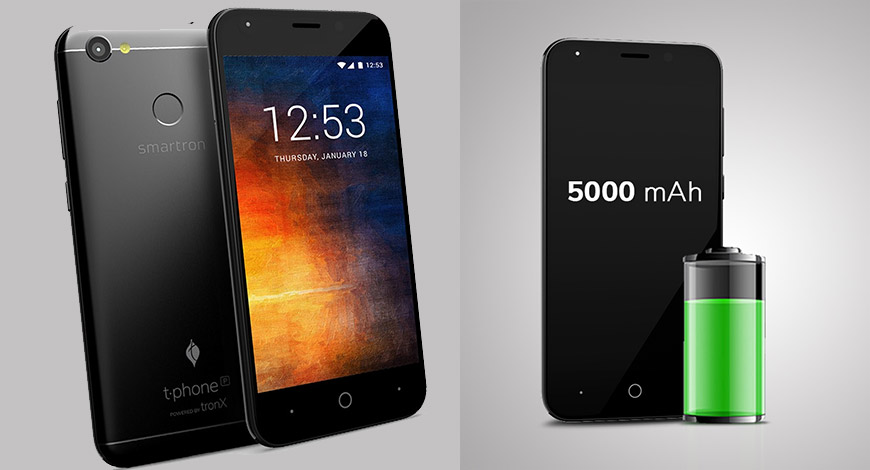 Image:.digiindia.co.in
In a press statement, Amit Boni, Vice President Sales and Marketing, Smartron said, “The t.phone P is inspired by the multi-faceted, on the move, globally aware Indian consumer. This is a person who expects more from his phone without any compromises and without stretching the seams of his pockets. With a massive 5000mAh battery and an all-metal body, we’ve merged power and beauty into the t.phone P. To top it, we have layered it with Qualcomm Snapdragon 435 processing might give millions of Indians an enviable device at an exceptional price”.

Now, let us check out the specifications of this new Smartphone Smarton t.phone P.

The Smartron t.phone P comes with a full metal body and features a 5.2-inch HD (720×1280 pixels) IPS display and is powered by an octa-core Qualcomm Snapdragon 435 SoC with four processing cores at 1.4GHz and the other four cores at 1.1GHz, coupled with 3GB of RAM. It has a 32GB internal storage that is expandable up to 128GB via microSD card that comes in a hybrid dual-SIM configuration. The tphone P has been developed under Smartron’s “Powered by tronX” programme. So, with the tronX integration users can additionally get a 1,000GB of free cloud storage.

Coming to the camera part, It sports a 13-megapixel camera sensor on the rear with autofocus and an LED flash, while up front it has a 5-megapixel, fixed-focus sensor, along with a low-light flash. There are also preloaded features available such as Beautify, HDR, Panorama, Time Lapse, and Burst mode alongside a selfie-centric Wide Selfie to accompany the available camera hardware. Now, about connectivity options, the smartphone has 4G VoLTE, Wi-Fi 802.11 b/g/n, Bluetooth 4.1, GPS/ A-GPS, and Micro-USB with OTG support. Sensors on board include accelerometer, ambient light sensor, gyroscope, and proximity sensor. A fingerprint sensor is also available on the back, which is not only to lock the phone but also it lets users take pictures or answer calls with just one tap. As we said before, this phone is fuelled by a 5000mAh battery. The battery also supports a fast-charging technology that enables a full-day charge in 90 minutes of time.

This new Smartron t.phone P smartphone comes with a price tag of Rs. 7,999 and will be exclusively available through Flipkart. The first flash sale will begin on January 17 at 12 noon. Smartron is also offering 1TB free cloud storage via its t.cloud service.