Finally, the first look poster of Richa Chadha’s upcoming film Shakeela is out and it looks bold and fearless. Richa Chadha who will be playing the main role in this biopic of south Indian adult star Shakeela. After several stills unveiled previously, fans were gifted with the first poster of the much-anticipated film Shakeela. 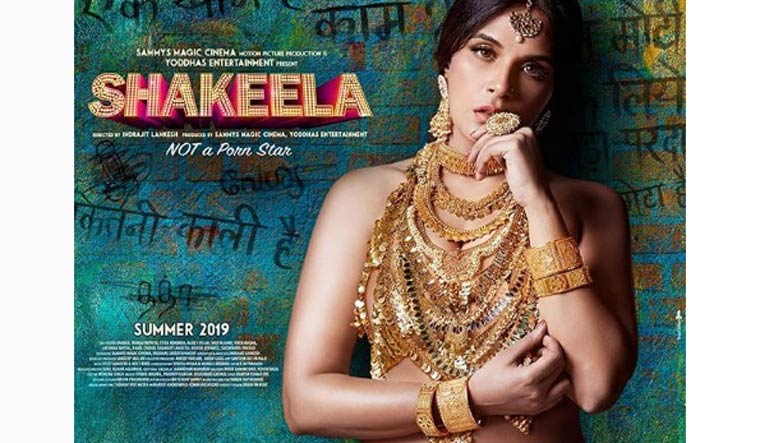 Shakeela Khan rose to fame after the demise of Silk Smitha, who was another popular adult star from the southern film industry. Shakeela went on to act in several adult films in Tamil, Telugu, Malayalam and Kannada. Shakeela Khan starred in several controversial projects in different south Indian languages. Shakeela’s films were also translated into foreign languages like Mandarin and Russian. Kinnara Thumbikal in Malayalam was one of her most popular films. This upcoming film narrates the rags-to-riches-to-rags story of Shakeela Khan, who ruled south Indian cinema in the ’90s.

Coming to the first Look poster, actress Richa is seen drowned in gold jewellery from head to toe, highlighting the glamorous side of Shakeela’s life. In her background there is a wall with insults scribblings related to her skin colour, body and religious faith. There are also some obscene illustrations which have been scratched out.

Richa Chadha took to her social media handle and presented the first look of Shakeela, and captioned, “Bold and fearless. PRESENTING THE FIRST LOOK OF #Shakeela!”

Shakeela, the biopic, is directed by Indrajit Lankesh. This flick is bankrolled by Magic Cinemas and Yoddhas Entertainment. Starring Richa Chadha, Pankaj Tripathi, Rajeev Pillai and others. Shakeela Khan, herself, is reportedly making a cameo in the film. This film is gearing up to release in the summer of 2019.