Actor Ajay Devgn is back with a power-packed script for his next film Raid. Soon after the release of its first poster, the makers have released the first trailer of the film. Ajay Devgn also took to Twitter and shared the trailer with a caption that read, “Heroes don’t always come in uniform. Here’s the #RaidTrailer … in cinemas on 16th March.” 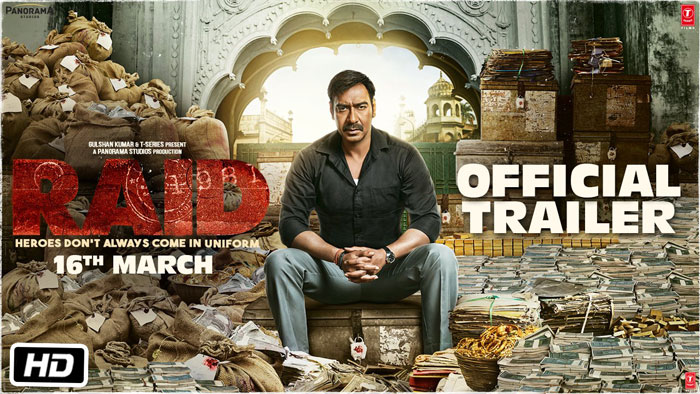 Image: trendfoxx.com
Set in 1981, Raid is based on one of the longest Income Tax raids in India. The film also explores the struggles of an upright Income Tax Officer in order to conduct a raid on one of the wealthy goons of a city.

The one-minute-long trailer is full of power-packed dialogues, it begins with Ajay’s symbolic tap on the door announcing his visit ahead of an IT-raid. Ajay as Amay Patnaik plays a Deputy Commissioner of Income Tax officer of Lucknow and takes on the powerful corrupt people in the society. Actress Ileana D’Cruz will be seen as Ajay’s wife and Saurabh Shukla in a poignant role.

Raid, directed by Raj Kumar Gupta, who previously did Aamir and No One Killed Jessica. The film has been written by Ritesh Shah, who has written hits like Pink and Airlift. Raid is produced by Bhushan Kumar, Krishan Kumar, Kumar Mangat Pathak and Abhishek Pathak. Starring Ajay Devgn, Ileana D’Cruz and Saurabh Shukla among others. Ajay and Ileana have teamed up together for the second time after Baadshaho. The film is scheduled to hit theatres on March 16.