Finally, the trailer of the highly awaited action film Race 3, the third instalment of Race franchise starring Salman Khan is out. After watching the trailer, it looks like Race 3 is going to be one action-packed Salman Khan extravaganza. And there’s no doubt that it will be a treat for all Salman Khan fans because the film consists of everything that a Salman’s fan wants the star to do, be it high-octane action sequences, delivering his trademark dialogues, and also managing time for some comedy and dance with Jacqueline Fernandez, and most importantly going shirtless in one of the scenes.

The 3 min 9 sec long trailer is a complete masala entertainer. Living up to the standard set by the previous two Abbas-Mustan films in the franchise, Race 3 has also got some high-octane action sequences. There are guns and explosions all around, be it on bikes, cars, helicopters or even in the air, the cast is seen handling firearms on every possible vehicle like a pro. 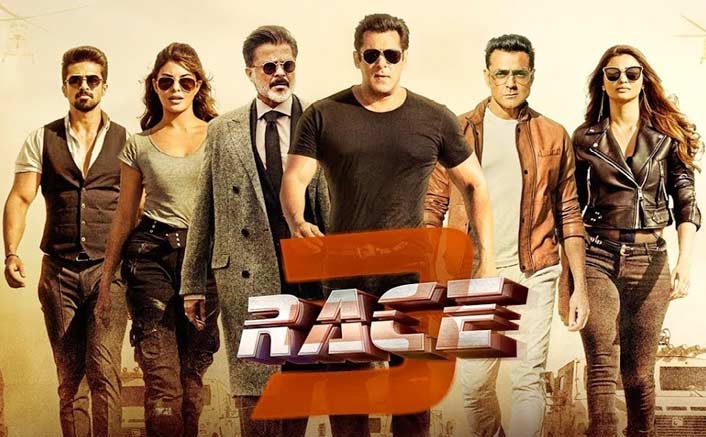 Image:koimoi.com
Salman, in his top action form is seen handling all kinds of weapons in the trailer. One shot that especially stays back in your mind is towards the end where Salman is walking with a huge-ass bazooka. Anil Kapoor will be seen in the role of Shamsher, who Salman himself describes as the bossman. He delivers some crackling dialogues in his signature badass style, managing to steal all the limelight with his salt-and-pepper look. Jacqueline Fernandez’s sizzling pole dance sequence sets the stage on fire and in another scene, we see Jacqueline in full on combat-ready mode. On the other hand, Daisy Shah in a scene spins a knife, slits her red dress in half and is all set to take on the world.

Race 3 directed by Remo D’Souza, produced by Salman Khan Films and Ramesh Taurani under the banner of Tips Films. Starring Salman Khan, Jacqueline, Anil Kapoor, Bobby Deol, Daisy Shah and Saqib Saleem. Race 3 is expected to hit theatres on June 15. The makers are planning to release the film in 3D along with the usual 2D.