The Chinese smartphone makers Oppo has launched its latest smartphone, Oppo R17 Pro in its R-Series in India. This phone was previously launched in China back in August, and has numerous highlight features which include a Super VOOC Flash Charge fast charging tech, its triple rear camera setup, an in-display fingerprint sensor, a massive 6.4-inch full-HD+ display with a 19.5:9 aspect ratio, as well as 8GB of RAM. This new handset also bears a 25-megapixel front camera, complete with AI-based features including beautification. 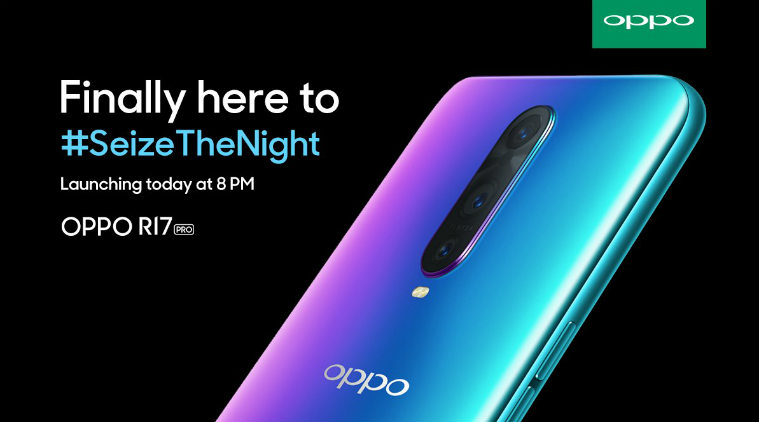 Let us take a look at the specifications of this latest smartphone by Oppo:

The Oppo R17 Pro sports a 6.4-inch full-HD+ (1080×2340 pixels) AMOLED display with a waterdrop-style notch, Corning Gorilla Glass 6, and a 91.5 percent screen-to-body ratio. It is powered by an octa-core Qualcomm Snapdragon 710 SoC, coupled with 8GB of RAM. This device packs a 128GB of internal storage, which can be further expandable up to 256GB via microSD card in a hybrid dual-SIM configuration. This dual-SIM (Nano) support device runs Colour OS 5.2, based on Android 8.1 Oreo.

Coming to the camera department, this new Oppo R17 Pro feature a triple rear camera setup, that includes a 12-megapixel sensor, a 20-megapixel sensor and a third lens that is a TOF 3D stereo camera that assists in depth effects amongst other things. The rear camera setup on this smartphone features optical image stabilisation, Dual Pixel PDAF, and the company is also touting an Ultra Night Mode that uses AI-based algorithms to optimise low-light photography. Up front, it features a 25-megapixel camera with AI Beauty Camera beautification with a live preview option. The beautification mode is said to learn preferences from the user to provide better results.

Now, let us take a look at the price and availability of this latest smartphone:

The Oppo R17 Pro in India is priced at Rs. 45,990. This smartphone will be available in Emerald Green and Radiant Mist colour options. It will be made available for purchase both online and offline in India.