A non-bailable arrest warrant is been filed against eight Tamil film actors which includes Suriya, Sathyaraj, R Sarathkumar and Sripriya by judicial magistrate court in Ooty on Tuesday,for their failure to appear before court in connection with a defamation case filed by a freelance journalist. 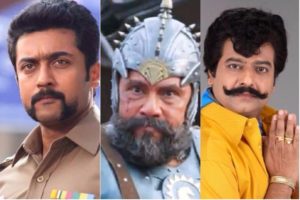 This case started when a Tamil daily published a report in 2009 that alleged that an actress had raised charges of prostitution on a group of fellow actors and actresses. The South India Cine Actors Association (Nadigar Sangam) condemn the Tamil daily for publishing the article by which the newspaper had retracted the report and published an apology.

A senior freelance Journalist, RozarioMariyaSusai, had filed a private complaint with the OotyJudicial magistrate against the actors stating that said the actors attacked all journalists instead of targeting a particular Tamil daily that published the article.

The court issued summons to these eight actors Suriya, Sathyaraj, Sarathkumar, Sripriya, Vijayakumar, Arun Vijay, Vivek, and Cheran to appear before the court on 2011. However, the actors filed a petition in the Madras high court seeking to dispense with their personal appearance in the court which got dismissed.