The Search giant Google’s Gmail, got a refresh in its design after five long years. Apart from design Gmail also has added many functionality features to both the web as well as mobile interface. These features include several AI-based features including Smart Reply, email snoozing, and nudging recipients to respond. It also includes certain privacy-focused features like a new Confidential mode, a revamped risk warning, and the ability to unsubscribe from newsletters with the click of a button. 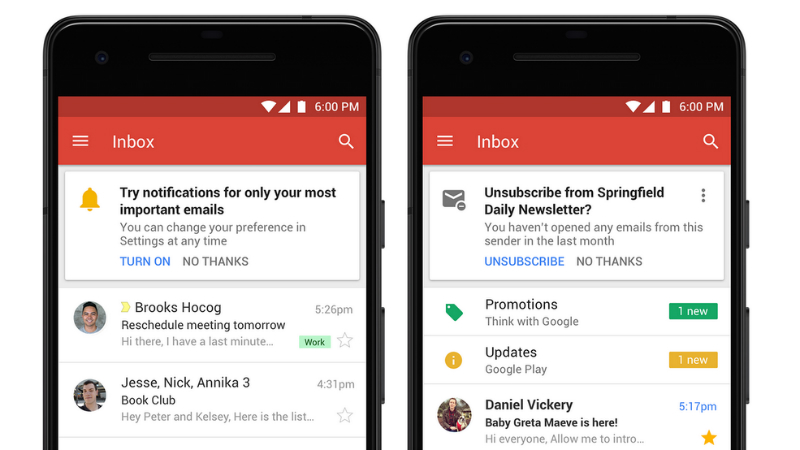 Let us take a look at these new features on Gmail.

Email Snoozing and Nudge for Reply:

The snoozing feature works well with the new hover menu that consists of shortcuts such as Archive, Delete, Mark as Read, and Snooze, right next to the preview. While the first three were already a part of Gmail’s functionality, Snooze is the latest addition and it allows you to put off emails that you cannot get to at the moment. These shortcuts will appear to the users when the user places the cursor on each message in the inbox.

The nudge to reply feature will prompt users to follow up and respond to messages that haven’t been replied to.

Smart Reply on Gmail’s web interface has been put out in the New Gmail, which is almost a year after it came to the mobile version. This feature provides the user with common responses to reply to emails received. These replies will vary depending on the context and history of messages. If you’re already using the Gmail app, you know what these look like. Inbox by Gmail already has Smart Reply built in as well.

This new Confidential feature by Gmail will allow the sender to set an expiry date for sensitive emails, which will automatically delete the email after the mentioned time interval or cancel it entirely. This new mode made possible due to Information Rights Management (IRM), which has been added to Gmail. This option will be available while composing an email, the mode provides senders with the option to prevent the recipient from forwarding, copying/ pasting, downloading, and printing the content in the email. This works even when mailing to a non-Gmail user, by sending a link instead of the actual email. When the sent mail is opened, the link will be fetched and displayed if you mailed another Gmail user, while other email users will only see the link. In both the cases, the sender is in-charge of how much time they would like to give the email to the recipient.

Additionally, there is also a two-factor authentication on a per-message basis added. You can request that the recipient authenticates with a passcode received via text message before they’re able to open a confidential email.

Gmail on the Web will now show a risk warning prompt when it detects an email received from a potentially suspicious source. The prompt will display warning text and offer a Delete Now button. This will offer some protection against clicking on harmful links in emails.

There is also a new native offline mode added that works a lot like the offline mode on Google Docs. Users can search, write, respond, delete, and archive up to 90 days’ worth of messages and work on them without interruption when internet connectivity is unavailable. Offline mode will be helpful for areas with sketchy Internet connectivity or while on the go, helping users preserve their content. G Suite will get the feature in coming weeks.

Coming to mobile, it does not get any design refresh, but Gmail has added a few functional features. One of the feature is High-priority notifications, this will help users get notified about important mail threads and email addresses without filtering through all the mails. This will be yet another AI-based feature allowing Gmail to assign priority to important emails from work, family, and so on. And Gmail will now offer shortcuts to unsubscribe from newsletters when it thinks that you no longer care about them. A prompt with shortcuts to unsubscribe or refuse will be shown on top of the inbox in the mobile interface.