While we entered a new year, Stylish Star Allu Arjun’s fans have got a gift by their star. The ‘first impact’ of Allu Arjun’s Telugu film Naa Peru Surya Naa illu India has been released on January 1, which looks quite strong. The first impact of Naa Peru Surya offers a glimpse of the storyline and roles of hero, heroine and other important roles. This first video shows that Allu Arjun is playing a young soldier, who is suffering from anger management issues. 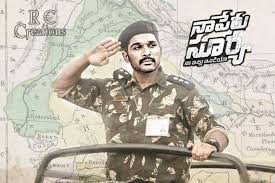 Naa Peru Surya Naa illu India first impact introduces to Allu Arjun’s character Surya, whose patriotic spirit is unparalleled. Surya is enrolled in the Army training camp where he seems like a misfit as he has major anger issues, which can be predicted by a dialogue, “For you Surya means a soldier but for the world Surya means anger.” At the training camp, he struggles to win over his seniors and his only wish is to die at the border.