Here’s a new teaser to watch for all the lalettan fans out there. Malayalam lady superstar Manju Warrier shared a new teaser of her upcoming film titled Mohanlal. In this film Manju plays a die-hard fan of Malayalam superstar Mohanlal also known as lalettan. In this 45-second long teaser, it shows Manju, as the only woman fan, celebrating the release of her favourite star’s new film with a group of other fans in front of Mohanlal’s hording and Manju is seen singing Mohanlal’s iconic Tonykutta song.

The teaser starts with Manju lip-syncing to a popular dialogue by actor Jagathy from Kottayam Kunjachan film. As per the dialogue she is conveying to the audience that actor Mohanlal would arrive soon. So, by the looks of the teaser the audience can expect Mohanlal at the theatres during this Vishu festival.

After lip-syncing the famous dialogue, Manju goes on to sing the popular track Tonykutta and starts dancing with the other fans. Tonykutta was sung by superstar Mohanlal himself for his film No.20 Madras Mail in 1990. 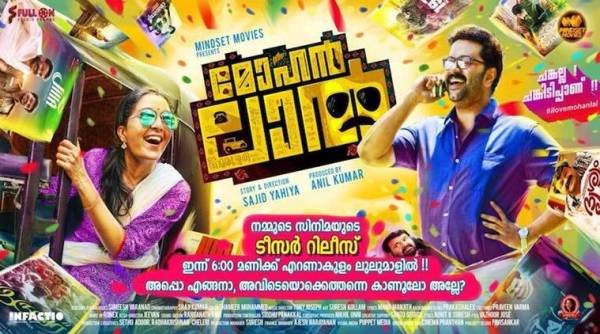 In this upcoming film, Manju will be playing a character called Meenukutty, who is a huge fan of actor Mohanlal. Looks like Meenu was born on the same day when Mohanlal appeared for the first time on the silver screens across Kerala, through the iconic movie Manjil Virinja Pookal. Looking by the teasers and posters, we can hope that this film is not a story about a fan, who’s obsession for his or her favourite star turn serious and dark. It looks like the movie is filled with full of energy like the actor himself.

About other projects, Manju is also part of Mohanlal’s upcoming big-ticket film Odiyan, which is directed by VA Shrikumar Menon.

Mohanlal the film is expected to hit theatres for Vishu this year. So, like Meenukutty said in one of the teaser, all the Lalettan fans and the audience are “katta waiting” for the film to hit the theatres!