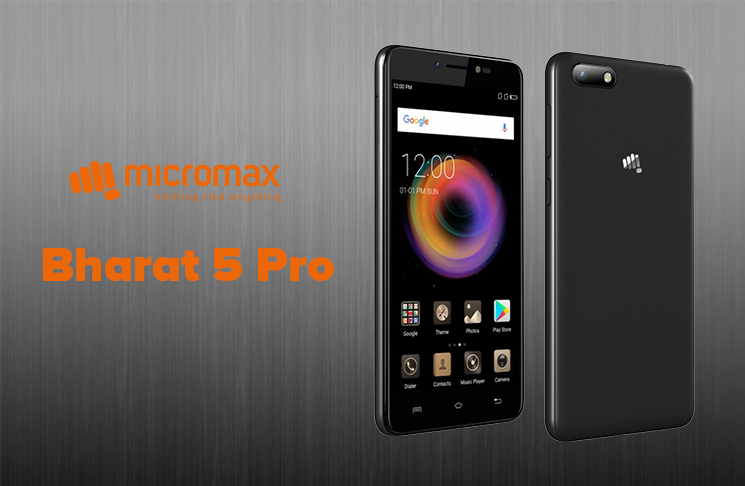 This move by Micromax appears to be aimed to take on Xiaomi’s Redmi 5 launch that happened on the same day. The biggest highlight of the Bharat 5 Pro is its 5000mAh battery, complete with a reverse charging feature that lets the smartphone to be used as a power bank. Other highlights include a face unlock feature, and an LED flash module for the front camera.

Let us take a look into the specifications of this new smartphone by Micromax.

The Micromax Bharat 5 Pro sports a 5.2-inch HD (720×1280 pixels) display and is powered by a 1.3GHz quad-core processor coupled with 3GB DDR3 RAM. This new smartphone comes with a 32GB internal storage, which is further expandable via microSD card. The dual-SIM Micromax Bharat 5 Pro runs on Android Nougat.

Coming to the camera department, it packs a 13-megapixel rear camera with Beauty Mode, Bokeh Effect and LED flash, while up front it has a 5-megapixel camera with 83.3-degree wide-angle lens, Beauty Mode and LED flash as well. In terms of connectivity options includes, 4G VoLTE, Wi-Fi, USB OTG, and other standard connectivity options. This new Micromax Bharat 5 Pro is fuelled by a 5000mAh battery as we mentioned before, which is claimed by the company to deliver up to 2 days of usage, and up to 3 weeks of standby time.

Now, in terms of Price and availability of this new smartphone.

This new Micromax Bharat 5 Pro in India is priced at Rs. 7,999. However, the availability of this new phone is yet to be announced by the company.