Micromax on launched the Bharat 5 along with the tagline “The Power Of 5,”the latest low-cost 4G smartphone from the domestic brand. Other than its low price point, the Bharat 5’s biggest highlight is a 5-megapixel rear camera with Bokeh Mode and a large 5000mAh battery, among other things.Interestingly, this comes a day after Xiaomi launched the “Desh ka smartphone” Redmi 5A. 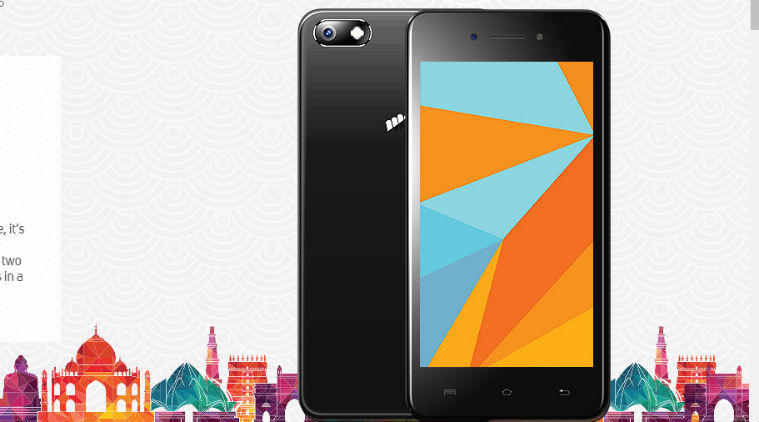 Image:Indianexpress.com
Micromax at its launch event also announced that it will launch more smartphones in its Bharat-Series, like Bharat 5 Plus and Bharat 5 Pro are planned to be launched in coming two months. The company also said it hopes to sell over 6 million Bharat-Series smartphones by March 2018.

Now, let us take a look into the Specifications of this new Micromax Bharat 5 smartphone.

Micromax Bharat 5 sports a 5.2-inch HD (720×1280 pixels) display. It is powered by a 1.3GHz quad-core processor (unspecified make), coupled with 1GB of DDR3 RAM. It has a 16GB of internal storage which Is further expandable up to 64 GB via microSD card.Micromax Bharat 5runs on Android Nougat. Coming to the camera, it has a pair of 5-megapixel cameras on the front and back, both featuring LED flash modules.Connectivity options of this dual-SIM device include 4G VoLTE, Wi-Fi 802.11 b/g/n, Bluetooth v4.0, FM radio, 3.5mm audio jack, and Micro-USB.The Micromax Bharat 5 is fuelled by a massive 5000mAh battery, which the company claims to deliver up to 2 days of battery life, and a standby time of up to 3 weeks.

Micromax Bharat 5 in India is priced at Rs. 5,555, and it will be made available to buy via offline stores in the country.