The much-awaited teaser of Karthik Subbaraj’s upcoming film Mercury is out and it looks like Subbaraj is finally back with a silent film. The leading stars of Southern industries such as Dhanush, Rana Daggubati, Nivin Pauly and Rakshit Shetty have took to their Twitter accounts and released the teaser of Mercury.

Speaking about the chilling teaser, the one-minute long teaser starts with a shot of a scary place. It shows a tombstone which reads, “In the memory of 84 people died in this town due to Mercury poisoning 1992.” The film looks like it revolves around a bunch of youngsters trapped somewhere in a strange and scary place. 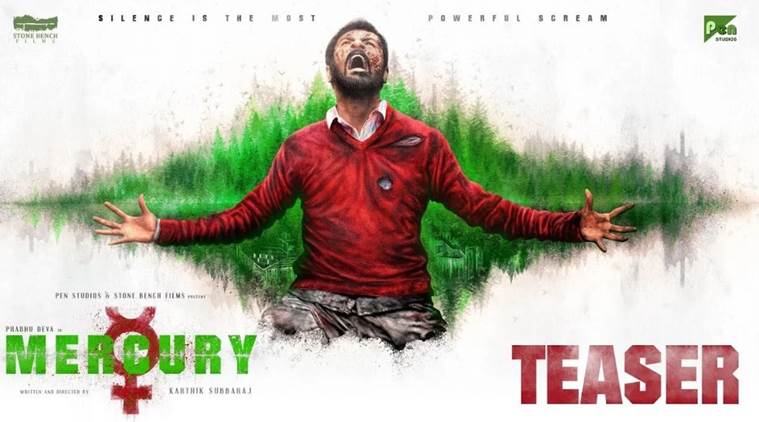 Mercury, directed by Karthik Subbaraj. Starring Prabhu Deva playing a villain role opposite Sananth Reddy, Deepak Paramesh, Anish Padman, Shashank and Remya Nambeesan with music composed by Santhosh Narayanan. The camera is taken cared by National Award-winning cinematographer Thirunavukkarasu. Mercury is a silent thriller and will be released in many languages simultaneously and it is scheduled to hit theatres on April 13, 2018.

Other than Mercury, Karthik Subbaraj is teaming up with superstar Rajinikanth for a big project. which will have music by Anirudh Ravichander and will be bankrolled by Sun Pictures. Subbaraj had also announced a project with Dhanush, which is likely to be produced by Shashikanth of Y NOT Studios.