Here’s an exciting news to all the Baahubali fans out there, the lead actors of the magnum opus Prabhas and Rana Daggubati joining with the film’s director SS Rajamouli will be appearing for the first time on a talk show with Karan Johar. Just when we thought that the guest line-up of this season’s Koffee With Karan couldn’t get more interesting, Karan Johar recently shared a picture of his next guests on the show, who happen to be none other than Baahubali co-stars Prabhas and director. This is the first time that Prabhas and Rana Daggubati will make an appearance on KJo’s Koffee With Karan show. 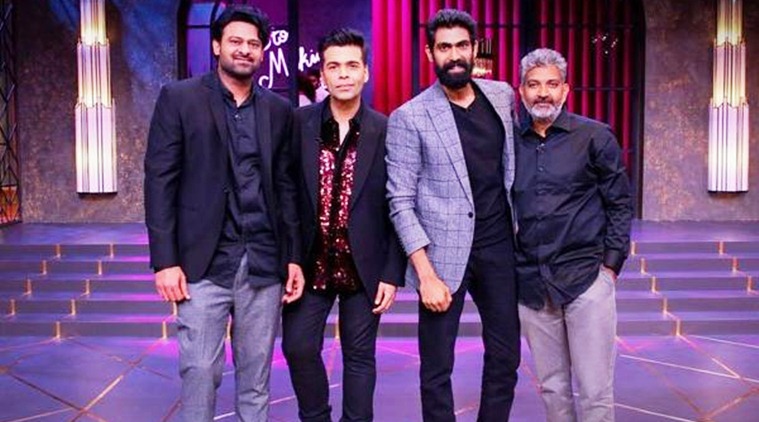 The host of the show Karan Johar took to his social media handle and shared a picture of himself along with team Baahubali and wrote: “My proudest cup of koffee with team Baahubali. Later, Rana Dagguabatt re-posted the picture on his Instagram profile and wrote, “Thank you for having us.”

Speaking in terms of work, Prabhas will next be seen in Sujeeth’s Saaho, starring Shraddha Kapoor as the leading lady, Neil Nitin Mukesh and Mandira Bedi in negative roles. Saaho is being filmed in Hindi and Telugu simultaneously. Meanwhile, Rana Daggubati has many projects in the pipeline. He is currently filming NTR’s biopic titled Kathanayakudu, in which he plays the role of N Chandrababu Naidu. He also has Haathi Mere Saathi and Hiranya Kashyap in the line-up. The actor has also signed Housefull 4. On the other hand, director SS Rajamouli has currently teamed up with Tollywood’s two top A listed stars for his upcoming project.