The upcoming trio Irrfan Khan, Dulquer Salmaan and Mithila Palkar’s film Karwaan has finally got a release date. This film was previously expected to hit theatres on June 1, but now it will be released on August 10. Meanwhile, the makers released the first poster of the film, that features the lead actors. The tagline on the poster reads, “3 Lost Souls…2 Dead Bodies…A Journey of a Lifetime …” The poster also features the trio sharing a lighter moment while sipping coconut water. 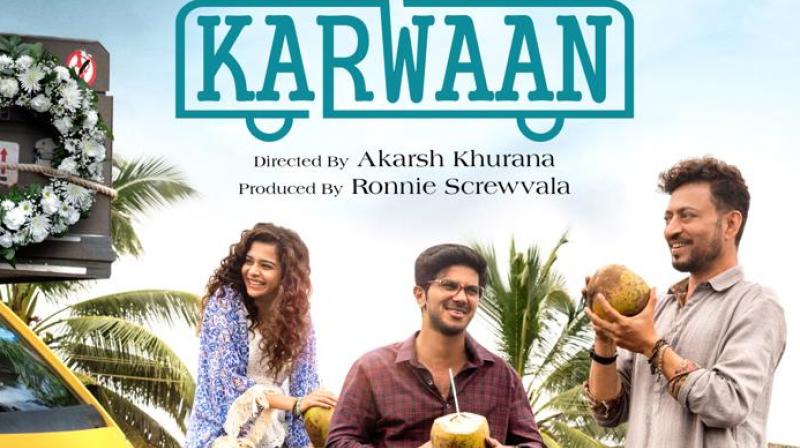 This upcoming film marks the Bollywood debut of South heartthrob Dulquer and Girl in the City and Little Things fame actress Mithila Palkar. Actor Dulquer took to his tweeter in order to unveil the release date of the movie alongside the film’s poster. The caption on the post read “And finally we are happy to announce a release date for ‘Karwaan’! Coming to a cinema near you on August 10! Cannot wait for you all to watch it”.

Karwaan story revolves around the lives of three oddballs from different walks of life who are thrown together on a bizarre journey. Each character undertakes the journey only to find the normalcy in their lives. This film has been widely shot in the beautiful locales of Kerala.

Karwaan, is directed by Akarsh Khurana, who marks his Bollywood debut. This film is produced by Ronnie Screwvala. Starring Irrfan Khan, Dulquer Salmaan and Mithila Palkar in the lead roles.