Google on Monday launched a payments app for India called Tezin order to gain a hold in India’s rapidly-growing digital payments space.Finance Minister Arun Jaitley, who launched Tez in New Delhi, said Google is keen on joining India’s transformation into a digital economy, especially after the demonetization. Tez uses Unified Payment Interface (UPI) and allows users to connect their bank accounts to the service. You can choose any of the 55 banks available inside the App’s list. The UPI, which is also used in BHIM app, allows direct payment from one bank account to the other. 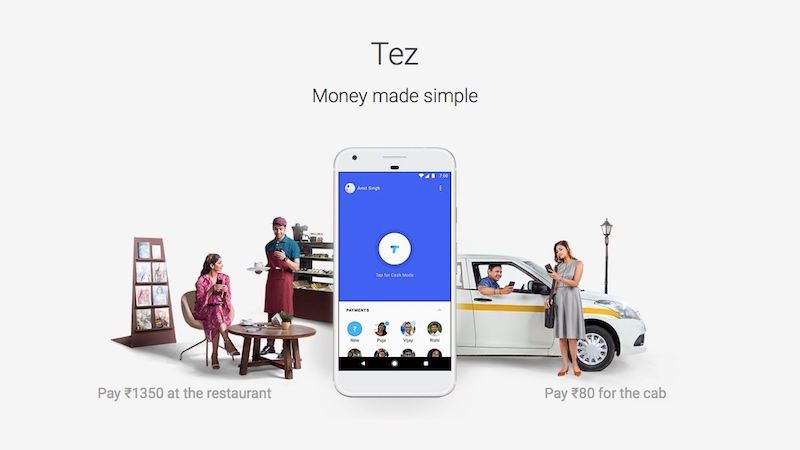 Image: gadgets.ndtv.com
Tez is a digital payment app. But not an e-wallet like Paytm or Freecharge. In simple words, you don’t add money in Tez app or recharge it. Instead, it connects directly to your bank account that you add.

Let us quickly go through the salient features of the app before you install and use it.

TheTez app is built on top of UPI, it supports 55 banks that are already using this interface. Almost all the popular banks, including HDFC, ICICI, SBI and Axis are part of the list. One of the key feature of the Tez app is Cash Mode. Google says that this mode has been put into the app to imitate the actual cash transactions that we all do because Indians love cash transactions. Like Google mentioned about howwe pay to the vegetable vendors and chaiwallahs. Which is by using cash. Well, the Tez app supports Cash Mode where you can pay, for example if your vegetable vendorhas a phone with Tez installed on it, using the cash mode you don’t have to input any bank account number or phone number. Just put the two phones together, tap on the Cash button and the Tez app will use sound to connect to the other phone and send money. It is like sending a Bluetooth file between two phones.

Image: bgr.in
However, now the Tez app can be used to purchase products from PVR Cinemas and redBus. In the coming weeks, DishTV, Jet Airways and Domino’s will be supported. Google says that it is also working with e-commerce platforms like Shopify and payment aggregators like Billdesk and PayU for the Tez app. The app supports English, Hindi, Bengali, Gujarati, Kannada, Marathi, Tamil, and Telugu on Android. Buton the iPhone it only supports English.Google says that the Tez app comes with the Tez Shield, a background security protection that ensures using the app is safe and transactions happen securely. Tez app can be secured with the phone’s PIN or with Google PIN.

Here is how to download and use the Tez App:

The Tez app is available both on Android and iOS platform. You can download the Tez app either from Google Playstore or from Apple Store.After you install the Tez app, enter your phone number by which Google will verify by sending a one time password (OTP).After your phone number gets successfully verified using an OTP, the app will ask you to enter you a Google PIN for additional security of your account. You can also use pattern lock or fingerprint for another layer of security. After this, the Tez app will be ready for use.

Now, to use the app, you have toconnect a bank account with it. By simple steps like just select your bank from the list. The app will then send a message to your bank, which already knows your phone number and hence will automatically fetch the details of your account. Confirm the details that you see in the Tez app, set the UPI PIN and add the account. It takes not more than 2 minutes.Once the account has been added, there are four ways to make a payment. The cash mode, this allows you to make payment when the person who you are paying is with you. Just put the phones together, hit the cash button and make the payment.Then there is the QR code method, which lets you scan a QR code to make the payment, similar to the wayyou use Paytm.Third method to pay is through using the good old IFSC code and bank account number.Finally, you can make the payment through the phone number. People who are already on Tez app are shown in the app. To make payment to these people, just tap on to their phone number and send the payment. Or you can receive it.

The interesting part is that the transactions are shown as chat updates. In between you can also talk to the people you are paying or getting the payment in the same Window.Using this app you can invite you friends from your contact list to use this app. Google gives cashbacks of Rs. 51 if your invitee downloads and makes a transaction of more than Rs. 50 on the app.

Digital payments market in India is expected to grow to $500 billion by 2020, which has attracted many players including Bharti Airtel to enter into this space. Facebook’s popular instant messaging service, WhatsApp is also working to enter into digital payment services in India, were the recent reports says that WhatsApp has nearly 200 million active users in India from its billion-plus users.