Finally, one of the most-awaited trailer of Akshay Kumar starrer historical sports drama ‘Gold’ is out. This trailer will surely ignite the emotion of patriotism among the fans. The trailer of the film with a tagline that read, “The Dream that united the nation”, combined with a background music which gives you an adrenaline rush will take the audience back in time and root for India’s victory against the Britishers in the theatres. This film marks the Bollywood debut of popular television actress Mouni Roy. She appears to be playing the role of Akshay’s wife in this film.

The lead actor of the film Akshay Kumar took to his twitter handle to share the trailer to his fans. The post read, “Winners under British India, Legends under Free India. Witness the golden era of Indian Hockey through Gold.”

The story of Gold is based on a real-life incident that is set on the backdrop of India winning its first gold medal in hockey as a free nation in the 1948 Summer Olympics. The 2 min 18 sec long trailer opens in the pre-independence era and traces the journey of a determined hockey player Tapan Das (played by Akshay Kumar), who makes India proud by fetching a gold medal for the country as an independent nation. However, it took 12 years for Tapan Das to make that dream a reality, from 1936 to 1948. Tapan Das, who is an assistant manager forms a hockey team that initially falls apart but later gets back and become united in order to achieve the goal. 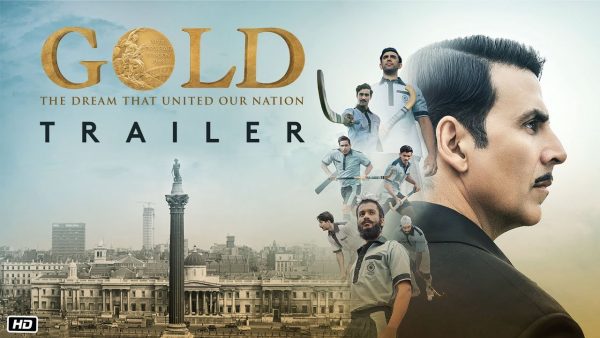 Gold is a story of one man’s dream, dedication and struggle. This film has been shot across India and the UK in order to capture the fascinating aspect of the pre-Independence era and the struggle of the Hockey players.