ourAll the Tollywood movie goers, here’s an exciting news for you. Two of the biggest multi-starrers are set to clash in this month. These movies include one of the most awaited film of this year, a Telugu multi-starrer, DevaDas. This is the first time were two of the popular lead actors from the Telugu film industry, Nagarjuna and Nani, are sharing screen space. This film also stars Rashmika Mandanna and Aakanksha Singh as the female leads. This flick is directed by Sriram Adittya and presented by C Dharma Raju and produced by Ashwini Dutt under the banner Vyjayanthi Movies. Mani Sharma has composed the music for this upcoming film. 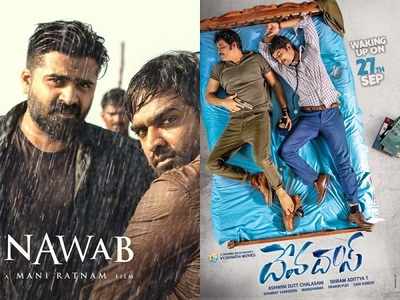 On the other hand, DevaDas will clash with the Telugu version of Mani Ratnam’s upcoming Tamil movie Chekka Chivantha Vaanam, titled Nawab. Actually, this film was originally scheduled for Sep 28 release, but the makers have decided to advance its release date. So, both the Tamil & Telugu versions of this film will hit theatres on Sep 27.

Coming to Nawab films cast, it is also a multi-starrer that has four heroes sharing screen space which includes Vijay Sethupathi, Simbu, Arvind Swami and Arun Vijay as the lead actors. Apart from these four big heroes, the film also has a huge female cast including Jyothika, Aditi Rao Hydari, Aishwarya Rajesh and Dayana Erappa. This flick is written/directed by Mani Ratnam and co-written by Shiva Ananth. This upcoming Tamil multi starrer is jointly produced by Mani Ratnam and Subashkaran under their banners Madras Talkies and Lyca Productions respectively. Music is helmed by music maestro AR Rahman.

We can’t just wait to watch this big multi starrers clash with each other on September 27. Let us wait and watch who will be leading in this race on this big day.