Finally, the teaser of much awaited multi-starrer DevaDas is out. This flick features two Tollywood’s A-listers Nagarjuna Akkineni and Nani in the lead roles. The makers of the movie released this teaser and called it as a Small Peg, where the video shows us Nagarjuna and Nani boozing. The chemistry between Nag and Nani looks natural and pleasing.

Coming to the teaser, this short video opens with Nag and Nani enjoying their drinks. But what’s funny here is Nani takes the raw peg by the time Nag asks about Nani’s preference of water or soda. Meanwhile, the expressions given by natural star Nani are very natural and quite hilarious. The pleasant background score and Nagarjuna spotting Nani drinking looks hilarious in the teaser. As per the teaser, the film looks to be full of light hearted comedy and will leave the audience thoroughly entertaining. Going by the teaser, this film promises a joyful and humours ride and we just can’t wait to watch this hilarious combo on big screens. 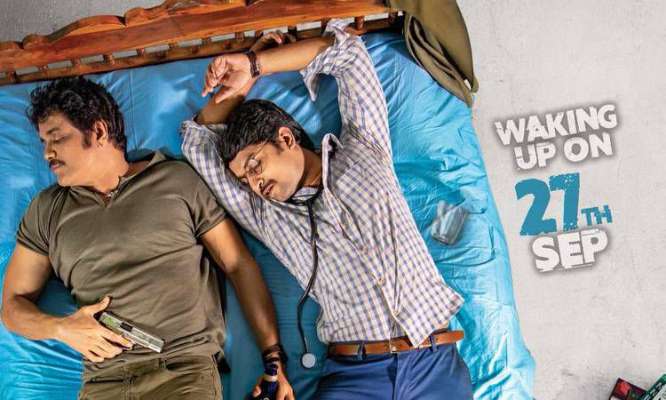 DevaDas is directed by Sriram Adittya and bankrolled by Ashwini Dutt under Vyjayanthi Movies banner, Starring Nagarjuna, Nani, Rashmika Mandanna and Aakanksha Singh in the lead roles. This upcoming film is scheduled to hit the big screens on September 27th.