Last year we saw a huge difference of surfing Internet more on our mobile devices than our computers. However, different companies want us to use their apps, it’s our mobile browsers that we depend on most which perhaps no one can understand it better than Google. After all, they are handling a huge amount of traffic that comes from your mobile devices. 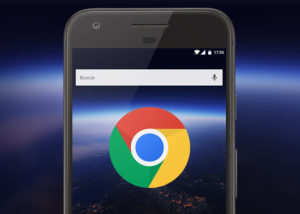 Image : Andro4all.com
Google Chrome has been one of the popular browser in the world. One of the biggest reasons why Chrome is so popular is because Google constantly keeps updating it.That’s why they’re always looking for ways to improve Chrome and one of those ways is by making it faster.The latest update to Chrome comes out as the Google Chrome 59.

Google updated its Chrome browser for Android, and though the search giant did not include many features. One of the major changes that comes to this latest version of the browser for Android users is that page load time has now been reduced, and pages on Google Chrome for Android will now load faster.Google says that you’ll see a speed boost of as much as 20%. That’s when all the conditions are perfect, but the minimum gain should still be around 10%.Google revealed what’s behind Chrome 59’s increased speed. It’s the result of improvements to the browser’s V8 JavaScript engine. JavaScript drives a lot of the advanced functionality you use on the websites you visit

Google Chrome 59 also addresses a problem which has been common for Chrome on PC as well as Android platforms that is memory consumption. Google Chrome 59 ensures that memory will be less consumed. Not only does it make browsing faster, but it also ensures the browser is itself fast and lightweight.

In this latest update for Chrome it is not only the performance increases but also stability fixes, and security patches is full support for animated PNGs. Apple and Mozilla have supported the format in their iMessage and Firefox apps, so Google is late in this regard.

So, will the future Chrome update include native ad-blocking because Google gave publishers advanced warning, and so long as they do not feature offending ads, they will be clear.

Have you updated your Google Chrome for Android yet? However, your Android device should install the update to Chrome 59 automatically or else you cango to the Play Store and click My apps & games page and check if an update is waiting to get accepted.