The US-based construction machinery manufacturing company Cat, has has come up with yet another smartphone. This new smartphone is known as Cat S61 rugged smartphone. Cat S61 is a successor to its previous phone S60. The main features of this new smartphone are that it sports an upgraded thermal camera that is acclaimed to read temperatures up to 400-degree Celsius and includes a laser-assisted distance measurement solution as well as an indoor air quality sensor. 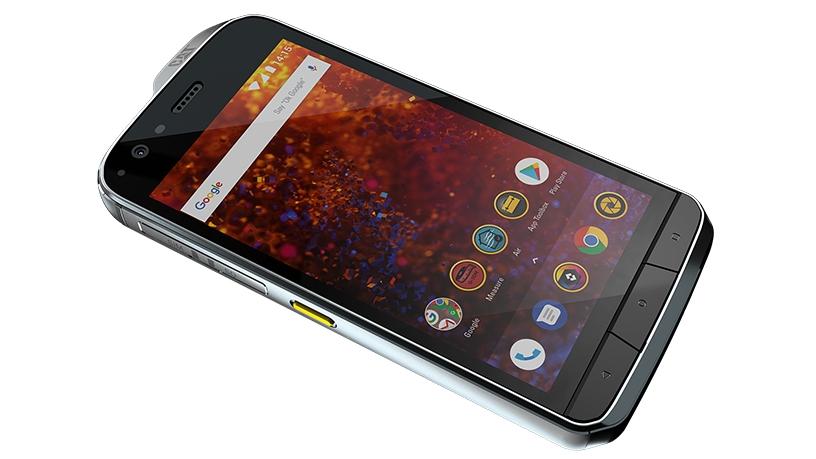 Image: itweb.co.za
The company is marketing this new Cat S61, by focusing on the ability to measure temperature up to 400-degree Celsius, which is higher than the 120-degree Celsius temperature measuring of its previous version S60. Additionally, there is an embedded laser that helps to measure point-to-point distances up to 10 metres. This laser technology integration can also be used to calculate areas. The company has also provided an air quality sensor on the new S61 that automatically samples the air every 30 seconds and notifies users of high levels of indoor air pollutants. The sensor in S61 can detect various volatile organic compounds, including paint, solvent, and furniture among others.

This new Cat S61 is said to be built with a robust body that has a die-cast aluminium frame, meeting the US Military’s MIL-SPEC 810G standard. By this sold built, the handset is also acclaimed to resist drops from up to 1.8 metres and immersion in up to 3 metres of water for 60 minutes, including salt water. The device is also supposed to be resistant to all types of dust.

This smartphone by Cat is similar to the previous Cat offerings, which is meant for outdoor professionals, such as architects. The smartphone’s new FLIR thermal camera system will let field workers measure temperature while on the go.

Now, let us take a look into the specifications of this new smartphone by Cat.

The new Cat S61 doesn’t have as top-notch hardware as the latest models in the market. It features a 5.2-inch full-HD (1080×1920 pixels) display along with Corning Gorilla Glass 5 protection. It is powered by a Qualcomm Snapdragon 630 SoC, which is clocked at 2.2GHz, coupled with 4GB of RAM. It has a 64GB internal storage which is further expandable via microSD card. However, the new Cat S61 runs Android 8.0 Oreo out of the box (upgradeable to Android P).

In terms of camera, The Cat S61 has a 16-megapixel sensor on the rear side with PDAF and a 8-megapixel sensor in front. On the connectivity part, the handset has Wi-Fi 802.11 b/g/n, Bluetooth v5.0, GPS/ A-GPS, NFC, FM radio, and Micro-USB. Sensors on board include the FLIR thermal camera and indoor air quality as well as accelerometer, barometer, compass, gyro, and proximity. This new smartphone is fuelled by a 4500mAh battery with Quick Charge 4.0 support.

In terms of price and availability of this new smartphone,