The Baadshaho teaser is out and it is not only entertaining but also engaging,and also gives us a hint of the real story. Baadshaho is set during the 1975 Emergency period, during the rule of the then Prime Minister Indira Gandhi. Baadshaho is a story of six badasses featuring Ajay Devgn, Ileana D’Cruz, Emraan Hashmi, Esha Gupta, Vidyut Jammwal and Sanjay Mishra, who saw an opportunity to change their destiny in times of riots and anguish and try to steal the Indian gold reserve which is being transported from one city to another. 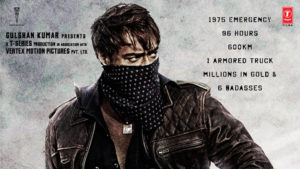 The Baadshaho teaser opens with glimpses of the original 1975 footage showing Indira Gandhi signing the Emergency order. Then,it shows how the army takes over and the gold is being transported to a safe place. Here comes Ajay Devgn, with his heavy Haryanvi accent. The other characters are introduced one after the other, however, the fast-paced background score andthe superb action sequences that keep us on the edge of our seats. While it is not clear that if these six badasses are working as a team or not but we can see an intense rivalry between Ajay and Vidyut. Other than these actions and rivalry, we even see a sizzling romance between Ileana and Ajay. The teaser gives us a glimpse where Ileana takes off her clothes and the duo share a passionate kiss. The teaser also shows us a glimpse of Sunny Leone where Emraan Hashmi is seen romancing with Sunny.

Over all Baadshaho teaser is really amazing with lots of action, romance and emotion. The movie is directed by Milan Luthria and written by Rajat Arora,Ankit Tiwari has composed the music for the film and Sunny Leone making a special appearance in a song sequence. The film is Majorly shot in Jodhpur in Rajasthan. It is said that the action-thriller would release on September 1, 2017.We just can’t wait to see the film now.