If we think, a woman’s body is a beautiful creation by God. A naked women’s body is mostly desired and is a subject for every fantasy behind closed doors. But in public, even a glimpse of women’s skin is condemned. Stuck in between these two extremes is the act of breastfeeding, which despite being a natural, beautiful act, finds unacceptable when done in public. Even in the Western countries, which is known to be open about most things, women breastfeeding in public have been criticised, sometimes by fellow women! It is looked upon with embarrassment and shamed. 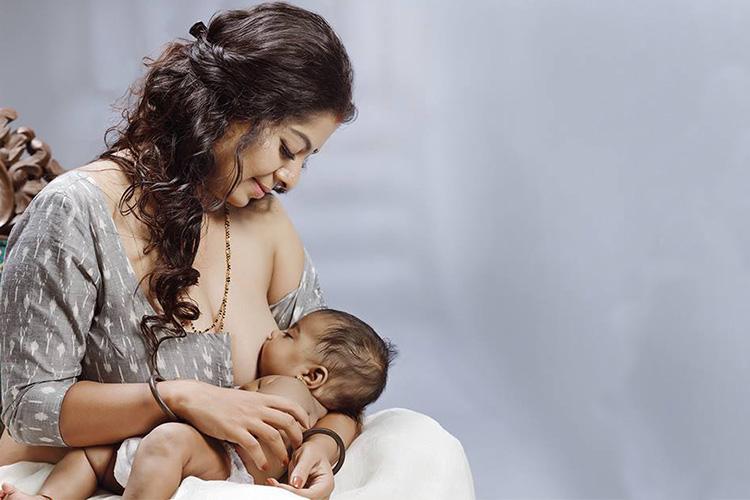 Image:thenewsminute.com
When most Indian magazines still choose to have Bollywood actresses or models on their cover pages on a regular basis, a Malayalam magazine called Grihalakshmi has changed the game. In this month’s issue, Kerala based magazine Grihalakshmi, has taken a rather bold step by showcasing a breastfeeding woman on their cover page. Considering that public breastfeeding is still taboo.

The bold cover pic has created quite a buzz already on the social media, with people praising the magazine and Joesph’s vision and bold step. Of course, still there were users those who have criticised the fact that the magazine did not take an actual mother on the cover, or the fact that not all mothers manage to look this glamourous when breastfeeding. However, surprisingly greater number of reactions to this cover have been positive.

Meanwhile, this is the first time an Indian magazine that featured a woman breastfeeding. But, internationally a breastfeeding woman has been featured in the famous TIME magazine cover in 2012 (But that sparked a controversy because the child was considered too old for breastfeeding), Elle Australia in 2015 and a magazine called Redbook way back in 1997.