There has been a buzz going on in Bollywood as well as the sporting circles ever since the rumourabout Ranveer Singh portraying the role of Indian cricket captain Kapil Dev in a biopic, which will be directed by Kabir Khan.

As per the reports by Indian media that the biopic will be around the 1983 Cricket World Cup which India won. Kapil Dev, the then Indian cricket team captain, lifted the cup at the Lords’ Cricket Ground in London. There were various reports which claim that a biopic is being made on Kapil Dev’s life, but Kapil Dev clarifies, “There’s a misconception about the film; it is not a biopic. It is a plot based on 1983 World Cup and Ranveer is playing my role in it. The film is not about me, but on how we won the World Cup as a team.” As the team captain, his energy and passion inspired Team India and helped to win the World Cup, an event which made cricket a nation loved game in India. 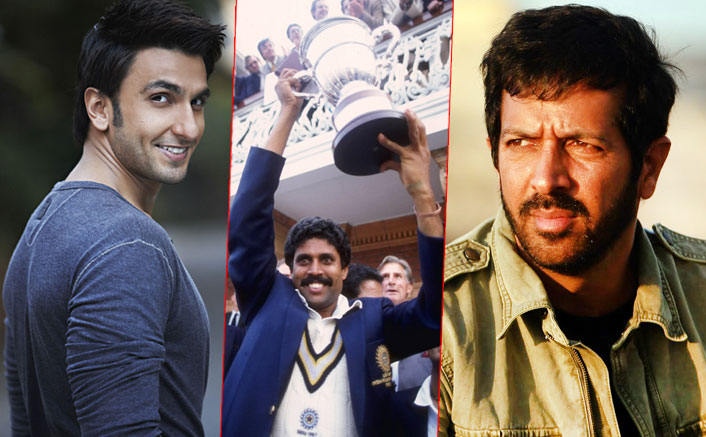 Image: koimoi.com
When asked whether he is happy about Ranveer playing him onscreen and will he spend some time with Ranveer so that the he can learn about his role more, Kapil Dev said, “Of course! Ranveer is a fabulous actor and there is no question of doubting his ability. I’m sure he will portray me well on screen!” He adds with a laugh, “But I would definitely like to see how many mistakes of English he makes because I used to do that!” About spending time with Ranveer “I don’t think fantastic actors like Ranveer require that. But if he wants to know how I talk or how I handle things, or if the director feels the need for this, I’m always ready to support them!”

Ranveer Singh in the launch event said when Kabir narrated him the story, he was surprised and shocked. He said “I was born into a time when cricket was the number one sport in our country, it was the biggest thing and I never knew the back story. When Kabir Khan told me I am making film on 1983 I was like finally the greatest sport story is coming into screen,” “It came as a huge surprise to me when Kabir sir started narrating me the story. It was so surprising to learn the odds against which these gentlemen had to fight for the greatest sports triumph. More than a great sports story it’s a great human story. It is exciting and surreal for me,” he added.

Talking about the role, Kabir Khan said Ranveer is the perfect choice to play Kapil. He said, “As a young schoolboy when I watched India win the 1983 Cricket World Cup, I had no idea that from that day onwards Cricket in India will change forever”.  He also added “As a filmmaker, the journey to that win filled with raw energy and sheer passion of that young Indian team is probably one of the most exciting stories I have worked on. And it’s great to have Ranveer come on board to play Kapil Dev, as honestly, I could see no one else for the role, ever since I started finalising the script.”

If the reports are to be believed, the film is being backed by Vishnu Vardhan Induri of Vibri Media and founder of CCL, along with Phantom Films.The casting of the other cricket players is currently in process. The film will be shot at real locations and will go on floors early next year.